skip to main | skip to sidebar

now say it with a dracula voice!
Posted by KrOB at 4:20 AM No comments:

space is the place

A Message from Film Farm "Chief of Stuff", Spy

January 28th:
a space-y bus trip featuring SPACE IS THE PLACE with sun ra and his intergalactic arkestra

2 weeks ago, i had a wrestling fight with a flaming lotus girl. we tore each others panties off... literally. yup, its that kind of bus trip.

there's limited space, about 40 people, so RSVP if you wanna go. this will be our 4th film farm on the bus, it has been a HUGE success!! this one is special because it's MY BIRTHDAY. get ready to make all sorts of sins... ON WHEELS!! god damn i'm excited. bring whippitts and crackers!

film farm costs $10, a STEAL for alllll the popcorn, bus ride, movies and entertainment you get!!

we meet at ritual coffee on valencia st 6pm we and get home around 12am.

sidenote from WFMU.
Posted by KrOB at 9:54 AM No comments:

FROM THE ASK Dr. HAL WEBSITE: But– what’s going on on Monday nights these days? Pilgrim, I’ll tell you. It’s an amazing event, KrOB’s Film Farm. It’s KrOB showing his movies and edits. It’s free popcorn. It’s KrOB’s patented eyenoise™ and all that goes with it. You get on the bus, you pay $10.00 but that’s to defray the cost of fuel, mainly. Because the bus will be in motion. Each time that old bus will trundle off to a delightful pre-picked secret destination, and en route, while the bus rumbles along with Chicken at the wheel, two projectors will simultaneously present KrOB’s show. Leave the driving to Chicken, the show to KrOB. Thanks for the plug, Hal.

Say, did you know that northern california is like dennis miller and laughter when it comes to roller skating? ....especially on monday nights? not ONE roller rink has an "open skate" as far as i can throw myself. but, you know, everyone has a price.... On January 21st, for SUPERHERO SKATING, KrOB'S Film Farm invites all heroes and villians to skate it out on the boogie rink of destiny (Paradise Skate in Antioch)! what you do, is come in costume, preferably as a superhero or supervillian of your own design--

-- and get on Chicken John's Applause Bus for a night of features from the great BRUTALLO! 
Guided by Christine Metropoulos and Mr. Sloumberfugex of Brutallo.com, we go over the river and down through the dense woods of the fabled imagination of stop-motion animator Ray Harryhausen. Our fantastic escapade is sonically paced by equally animated electronic musicians: Mad Hatter Hans Grusel falls down the rabbit’s hole with Alice in Wonderland, while the terrific (and sometimes terrifying) twosome Tarantism wreak havoc with Mother Goose’s Nursery Rhymes. With his eerie soundscapes, audio- and video-editing wizard Loachfillet wolfs down Little Red Riding Hood; KrOB lurks through the forest with Hansel and Gretel ;
Bran(…)Pos rhapsodizes to Rapunzel; and deft soundscapist HeadBoggle crowns King Midas.

Here's the Film Farm write-up for the encore SF presentation of SpaceDisco-One.

We got 2 hours of skating time in a rink all to ourselves! We'll have reality manipulation by our very own voiceless ambassadors on wheels, Telepathik Friend and i might even get to play the music if the fledgling owner guy by the dashboard light will let a sith lord in his dj booth... i got a few mind tricks up my skull... we'll see.... The lovely Spy will act as your groove-a-delic Stewardess, serving the drinks and making you comfortable. She'll have a new drink made special just for the trip and there'll be a multitude of munchies to rot your teeth and suspend your disbelief as we roll aboard the geek-freaking Odeon Applause Bus! Make yourself comfortable snuggled among delightful company. It’s timed so that there’s a double feature; the first picture plays on the way out, the main feature on the way back. HIghly Recommended!


Meet in front of Ritual Roasters Cafe, 1026 Valencia St. at 6:00 PM for boarding. We recommend that you bring a blanket or sleeping bag / pajamas or SUPERSUIT!


reservations (no more than 40): krob@askdrhal.com ps: get a free box of candy if you answer this week's trivia question correctly.

In what book does this quote appear?:
"We shall meet in the place were there is no darkness."
Posted by KrOB at 3:11 PM No comments: 
Our first outing was alot of fun. a trip to boulevard bowl in petaluma playing our shit on two screens on either side of the bus. Once everyone was nestled, Chicken John rolled through eastern San Francisco and took us north over the Golden Gate. Starting with EYENOISE, an edited version of KINGPIN, a 50's education short called "LET'S GO BOWLING", some BOB and things BOB-related (the answer to the film farm trivia question, by the way, was BOB), and, of course, ending with our feature feature...THE BIG LEBOWSKI! I played some eyenoise as usual and spy melted butter for popcorn and served sugary snacks and white russians! We had a munson, complete with comb-over and a dude, complete with robe and a quart of half-and-half! i bowled a 126 and we all had in-and-out burgers in rohnert park!

yea... it was pretty awesome.

Expect more of the same, only spookier this time around, as we snake around the bay with our movie features of beautiful blondes exceptionally lost.

We'll have even more drinks and snacks and free popcorn for everyone. Spy will have a drink special for each week.... what will it be this time around? Well whatever it is, it'll be cheap. I think this whole deal is a steal. $10. gets you a cool double feature on a great comfy ride. its win/win! Meet, once again, with any snuggling accessories (favorite pillow, blanket, mind-altering drugs, etc.), at Ritual Roasters at 6pm and when the applause bus rides up... get on!

Save a little for the bar in Port Costa, though. we'll take a bit of a walking tour around the area and check out this stunning historic landmark.

I'd talk for awhile about how i feel about both CARNIVAL of SOULS and INLAND EMPIRE... but the closer a thing is to my heart, the harder it is to articulate it to any satisfactory justice. So, i won't talk about these movies as much as i wish i could... save to say that CARNIVAL of SOULS has always been special to me. Featuring a creepy atonal organ soundtrack i first heard on Babs Bendix' HI-FI LIVING (a girl's show) and a great performance by Candace Hilligoss. Laura Dern, though, fucking rocks in INLAND EMPIRE. She'll probably never get an award for what she did, but she should. yes, David Lynch's new one is definitley one of his best. He's making movies with digital video now and saying goodbye to the expense and time-consumption of film processing. Cheaper and easier, he's making the movies he wants to make... which are the ones i'd rather be watching. We'll park somewhere pretty to watch and/or listen to this incredible movie... the soundtrack, for INLAND EMPIRE, i think, is his silkiest and darkest one to date.

rabbits
Posted by KrOB at 11:30 PM No comments:

Film Farm takes the show on the road for a six-week movie run on Chicken John's Applause Bus. We roll from Ritual Roasters on Valencia and follow through to the Bowling Alley at 6pm, presenting KINGPIN (bobby and peter farrelly, 1996) and THE BIG LEBOWSKI (joel and ethan coen, 1998). I'll play some BOB, too.

The pillows are big, but the space is limited... reserve your spot now. email me - smquestionmark@yahoo.com

The last Ask Dr. Hal! show will be trailed by an engagement of KrOB's Film Farm, as is traditional. 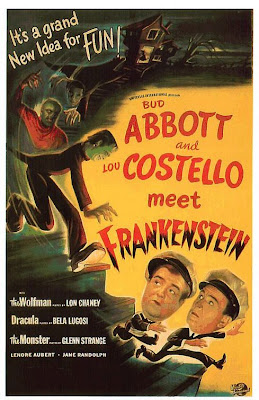 Abbott and Costello were America's preeminent film comedians, translating their popular stage act to several motion pictures and becoming part of the 20th century's pop-culture landscape. And, as it happened, in the late '40s Universal Studios realized they had two very marketable items under their contractual roof, as the duo were building a popular film career not too far away from a legion of legendary movie monsters who had been turning out more and more implausible sequels year after year. 1944's House of Frankenstein, for example, is a (very entertaining) monster rally which is practicallyA & C Meet Frank minus the comedic twosome. And so, in the final, magnificent example of Universal's monster world, in which Lugosi gives his all, throwing himself into the Dracula role for the last time, and John P. Fulton's great special effects still entertain, Bud and Lou make cinematic history-- and the best of any of their own comedies. 'The Boys' don't actually meet Dr. Frankenstein, of course, but they do tangle not only with Frankenstein's Monster (Glenn Strange), on whose unearthly, cadaverous physiognomy the old Don Post Monster Mask was based, not Karloff -- but also Dracula (Bela Lugosi) and The Wolf Man (Lon Chaney Jr.). The plot is rather interesting-- this far along in the Universal monster movie cycle we now observe a sinister and clearly defined Conspiracy of the Monsters. The story centers around the undead Count Dracula, who has acquired Frankenstein's creature, but wants to improve it -- with a more suggestible, more docile brain-- Lou Costello's, in fact. Surprisingly funny, genuinely atmospheric, and inventive, it's a movie worth cultivating-- a KrOB Klassic.

KrOB will also show his marvelous Eye Noise edits, making this the second-to-last iteration of the Film Farm. a don't-miss for this Hallowe'en Season.

With copyright-free popcorn, drinks of all colors, halloween candy, and, of course, spook-tacular SPY antics and appetizers...

Are you an artist?